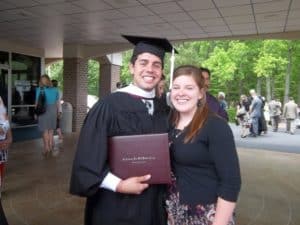 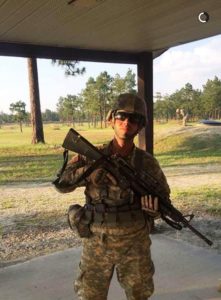 Now, with great excitement, Dr. Danny Baer would like to inform the Southeastern family of students and alumni that Southeastern and its alumni are beginning to experience the dividends of candidate status for accreditation by TRACS. At this point, three of our graduates have informed us that they have been accepted into graduate school. Heath Ferguson (2000) and Ashley Baines McNeese (2011) have been accepted into the graduate program at Liberty University. Deanna Brown Williams  (1996) was accepted into the graduate program at Pensacola Christian College.

Shortly after the news of candidate status broke, Jeremy Caraballo (2011) scheduled an appointment with Ms. Gaynor to have his transcripts sent to the Army to make application for a promotion. Last week, Jeremy Caraballo received some exciting news from the Army. Below is Jeremy’s note to Ms. Gaynor and an official copy of his recognition of qualification for promotion by the North Carolina National Guard.

Thank you for being so quick to respond regarding the transcript.  Army Education Services recognized my degree from Southeastern and is now going to award me the points I am entitled to for the promotion board!  It also means that a graduate from SFWBC can now commission as an officer in the Armed services or enlist as an E-4 instead of E-1.  Attached is the memo from the Education Office stating official reception. If Southeastern wants to use this letter for promotional purposes it can do so, as I have redacted my SSN from it.

View this document on Scribd

This site uses Akismet to reduce spam. Learn how your comment data is processed.